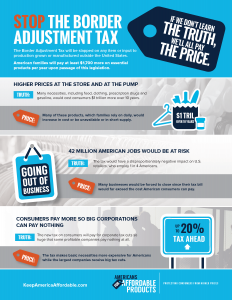 Imagine paying an additional 20 percent tax on many of the products you sell. It would be a budget-busting expense for most retailers. But that’s exactly what will happen if Congress passes a Border Adjustment Tax (BAT) as part of its larger tax reform plan.

That’s why we’re asking you to write your U.S. Representative today to urge him or her to delete the BAT. MRA wants tax reform as much as Congress does – but not if it’s on the backs of American families.

Click the image at the left to enlarge and display in your store.

The BAT is just fancy government lingo for a new tax on imported products that retailers – and ultimately consumers – will end up paying. Since absorbing a 20 percent tax on goods is next to impossible, retailers will be forced to pass along the added cost to customers.

It’s estimated that the average Michigan family will spend an additional $1,700 more per year on essential products, including food, clothing, prescription drugs and gasoline. That’s $1,700 fewer discretionary dollars in a family budget.

MRA knows how harmful the BAT will be to retailers. That’s why we’re engaged at every level to defeat the BAT. Working with our national partners and the Americans for Affordable Products coalition, we know just how seriously congressmen are considering this new tax. Don’t believe them Congressional leaders when they say the plan has been shelved. Until they find an alternative to fund their tax reform plan, they’ll keep looking at ways to tax retailers and your customers.

MRA’s got your back on the BAT but the most effective communication will come directly from you. Which is why we can’t stress enough how important it is to tell your congressman as soon as possible the disastrous effect a 20 percent import tax will have on your store and your customers.

Together, we can stop the BAT and keep retailers in business. If you have any questions, don’t hesitate to contact me at adrumm@retailers.com or 517-327-8919.

Please take a moment to send a letter to your congressman and U.S. senator today. You can find your Congressman’s name and contact information here. Below is a sample letter or even better, craft your own letter.

Retail is a penny business. Main street retailers operate on razor thin margins that have been severely impacted by over-regulation, changing markets,  tax loopholes, and expensive labor requirements like increased minimum wages and health care benefits. If the Border Adjustment Tax (BAT) is implemented, even more independent businesses like mine will disappear.

The Border Adjustment Tax will not guarantee that American companies will start making products that currently can only be imported. It will only guarantee that prices for  imported products will rise. The BAT is a jobs killer, a small business killer, and an attack on consumers’ wallets.

If Congress is serious about tax reform, scrap the BAT and find an alternative way to fund it.

As one of the retailers and small business owners who make up the backbone of our economy, I’d like to invite you to visit my store anytime.