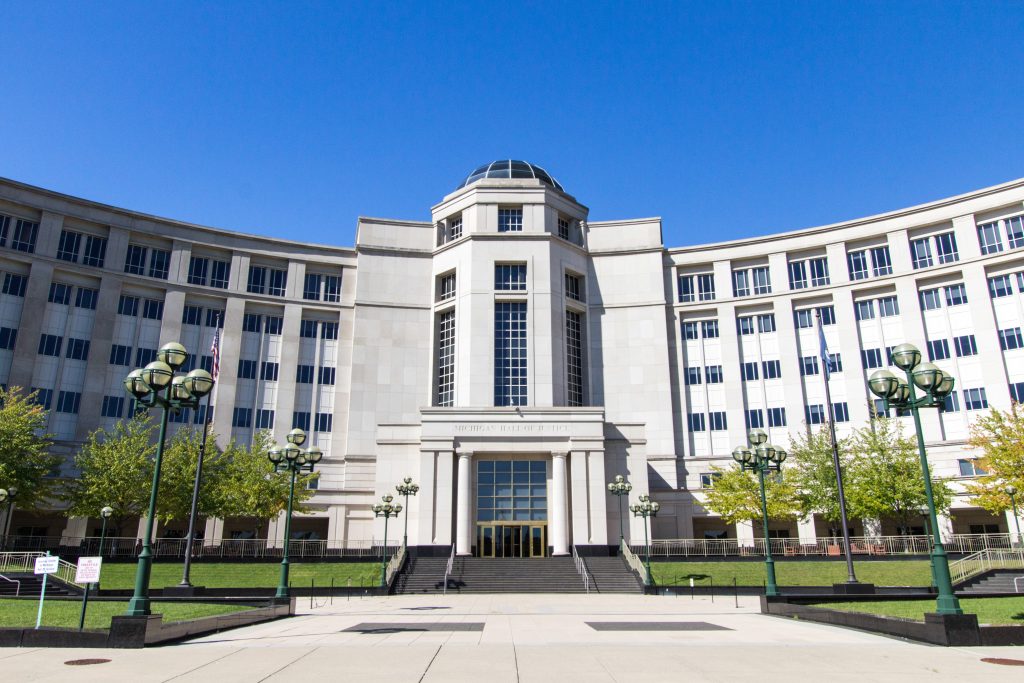 Before leaving town for a few weeks, legislators voted to move MRA’s priority legislation addressing sales on marketplaces and codifying the Wayfair decision out of committee. The bills, HB 4540–4543, were amended to make several technical changes, move the effective date to Jan. 1, 2020, and add other changes that both retailers and marketplaces agreed were necessary. While retailers agree the bills are straightforward and should move quickly, the process was slowed down by several groups/companies seeking exemptions and a longer implementation period. The bills have a lot of support from lawmakers but working through these requests may keep them moving at a steady but slower pace. Next step: House Ways & Means Committee. MRA Position: Support.

On Wednesday, the Michigan Supreme Court heard oral arguments on the Legislature’s request to issue an advisory opinion on whether their method of making changes to the adopted ballot proposals within the same legislative session it was adopted was constitutional. The court heard arguments from the solicitor general and deputy solicitor general as well as attorneys on behalf of the legislature, house democrats, and the ballot proposal group. Those arguing it was constitutional focused on how the 1963 constitution is silent in terms of how and when the legislature can amend initiated laws. They went on to note that Article 4, Section 9 of the Michigan Constitution it does not limit the power of the legislature to amend legislatively-adopted initiatives but does limit the power to amend initiatives adopted by the people (with a three-fourths vote requirement). They inferred that if the delegates had wanted there to be limits they would have added them since they did exactly that two paragraphs later. Those arguing the actions were unconstitutional focused on whether the actions thwarted the will of the people and the intent of the constitution.

Legislative democrats’ road funding plan doesn’t rely on a gas tax, but would increase taxes on businesses and add fees for heavy commercial vehicles. Their plan, released towards the end of June as HB 4779–4782, would raise $1.2 billion through by raising the corporate income tax rate to 8.5 percent (a 2.5 percentage point increase), charging heavy trucks – 26,000 pounds or more – 6 cents per mile for each mile traveled and creating a bridge toll program for trucks. Democrats say there will be more options/parts of the plan announced later to reach the real goal of finding $2.5 billion in additional revenue “without costing everyday Michiganders more.”

On June 26, the U.S. Supreme Court struck down a two-year residency requirement for anyone seeking a liquor store license in Tennessee. The court found that requiring an individual be a resident of Tennessee for two years created a barrier to interstate commerce and violates the Interstate Commerce Clause of the U.S. Constitution. The decision referenced the court’s 2005 decision in Granholm v. Heald that ended Michigan’s ban against out-of-state wineries from shipping into Michigan. The result of that case was out-of-state wineries can ship into Michigan so long as they have a Michigan Direct-Shipper license. But Granholm didn’t clarify if the commerce clause only applies to products/business interests or if producers of product and retailers should receive the same rights.

While Tennessee’s case is a little different, industry and legal experts anticipate it signals a willingness from the court to allow direct-to-consumer shipping by out-of-state retailers. A challenge to Michigan’s 2017 law prohibiting out-of-state retailers from shipping alcohol directly to consumers is pending in the Sixth Circuit U.S. Court of Appeals (Lebamoff Enterprises Inc., et al v. Rick Snyder, et al) and may answer those questions if it reaches the high court.

Retailers looking to sell CBD products (only topical products are currently allowed with a THC content of less than 0.3%) should know the state requires them to get an Industrial Hemp Processor/Handler license and to complete the 2019 Ag Pilot Program application. The industrial hemp processor handler license fee is $1,350 per business (all locations must be listed on the application) and selling products is considered marketing under industrial hemp legislation passed in December. Completion of the Ag Pilot Program license is also necessary to enter into a contract with the state’s Agriculture department as required by the federal Farm Bill even though the application is not geared towards retail sales of these products. If you have questions about completing the forms, contact the MDARD Customer Service Center at 800-292-3939.

There will likely be changes made to Michigan’s industrial hemp laws once federal rules are released implementing the 2018 Farm Bill. The federal rules are expected towards the end of 2019. MRA partner, the Food Marketing Institute  (FMI) filed comments with the Food and Drug Administration (FDA) earlier this week urging them to provide guidance governing the production, sale, quality and marketing of consumer goods that contain cannabis or cannabis-derived compounds. For an overview of the state-issued guidance from the Bureau of Marijuana Regulation (BMR) and the Michigan Dept. of Agriculture & Rural Development (MDARD) visit  https://www.michigan.gov/lara/0,4601,7-154-11472-493396–,00.html.

Employers who employed 100 or more employees in 2017 and/or 2018 must comply with the Equal Employment Opportunity Commission (EEOC) requirement to file a snapshot of their compensation data for employees from 2017 and 2018 by Sept. 30, 2019. The EEOC has released a Frequently Asked Questions page addressing collection of compensation data. The page addresses questions like who must submit data and what the “workforce snapshot period” should look like. In addition, other helpful resources such as a user guide and sample forms can be found here.

The federal government is appealing a district court decision that overturned a suspension of the requirement to collect 2017 data but did not request a stay, so it is assumed the data collection deadline for employers will remain in effect. Employers with 100 or more employees in 2017 and/or 2018 should prepare to meet the Sept. 30 deadline.

Spring bills signed by the governor: