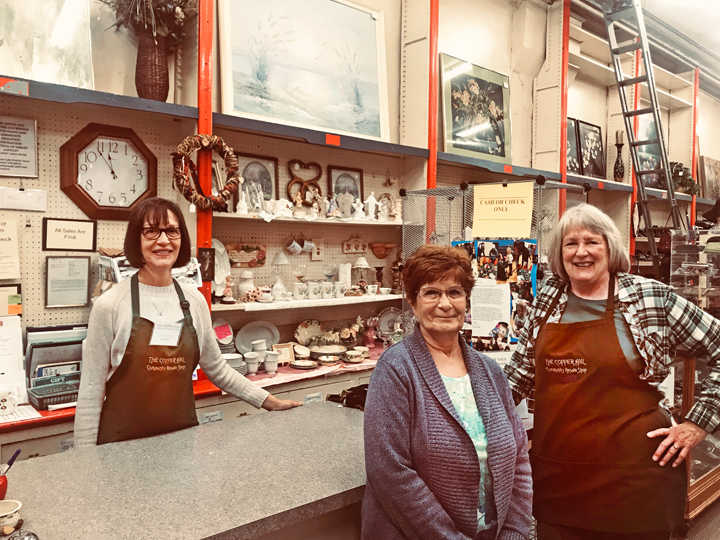 You might call Copper Nail a successful failure. It was supposed to be a senior center with a little shop. Instead, it became a successful retail shop that brings seniors together.

The popular two-story resale store – about 30 minutes west of Ann Arbor – has become a destination for locals and visitors alike. Evidence is a map near the entrance covered with push pins showing shoppers’ hometowns across the U.S., and around the world from places as far away as Germany, Taiwan and Australia. 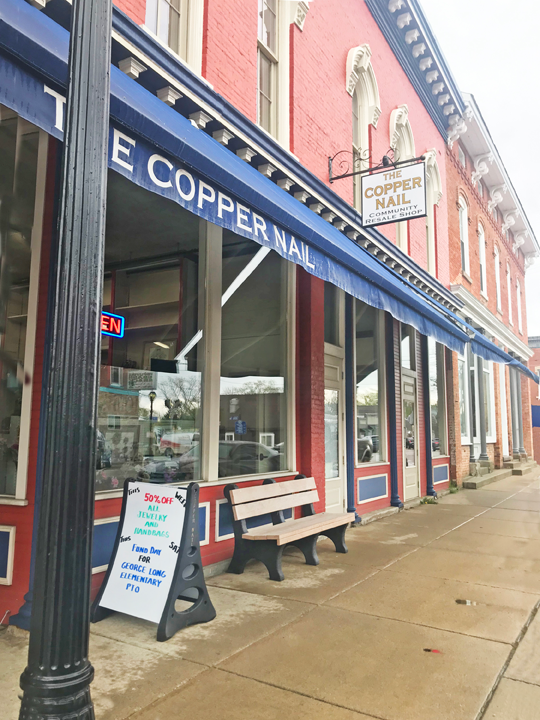 “They have great stuff,” says Mary Jane Marshall, manager of the Roaming Goat Cafe around the corner. “People always come in and talk about what treasures they find. Anything you need, you can find in the Copper Nail.”

Those treasures have included designer clothes, artwork, antique glassware, books, greeting cards and furniture. Locals like Marshall stop by regularly to explore new arrivals. The pastry cabinet in the Roaming Goat is a Copper Nail find.

COMMUNITY TREASURE
Unlike a traditional thrift shop, Copper Nail has a community center vibe. There’s a jar of cookies on a table surrounded with chairs that’s an invitation for people to sit down and chat with each other. This welcoming spot has been there since the store at 111 E. Main Street in downtown Grass Lake opened in 2007, says Marilyn O’Leary, a retired elementary school teacher and founding Copper Nail volunteer.

What makes Copper Nail a community treasure is the investment it makes in the community of around 1,200. This year, the store celebrated giving a total of $500,000 to 50 local nonprofits since opening. The store’s mission is to be a source of funding for Grass Lake community organizations so they can devote their resources to serving the community in their own unique ways.

The store has also generated enough revenues to make repairs to its home, a nearly 160-year-old red brick building with a smart blue awning. The nonprofit will own the former hardware store in a few years.

“It’s fantastic. I couldn’t gush more about what the Copper Nail does. It’s busy. It’s bringing people to the downtown,” says Todd Raehtz, who owns the Grass Lake Community Pharmacy across the street and is the former Chamber of Commerce president. “The business model – free labor and free products – is so good and they do good things with their money.”

‘LIKE FAMILY’
The store was inspired by a similar shop in nearby Manchester that has since closed. Initially, the idea was for a senior center with a little shop. In the beginning, there were a few shelves at the front of the store filled with things from the organizers’ homes. 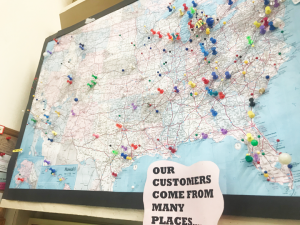 Volunteers put pins on a map of the United States to document the hometowns of all their customers. They’ve had visitors from across the country.

The rest of the space was going to be used for activity space for seniors. But that vision never materialized because the shop quickly grew into the space. These days, most of the 9,000-square-foot space is filled with donated items that come from the community and beyond. When the store started, volunteers scoured their homes for stuff to sell with one person contributing $100 so there was money in the till to make change.

While Copper Nail didn’t become the envisioned senior activity center, it still serves as a gathering spot for many seniors. A place where they connect with each other while doing something good for their community. The older demographic of 60 to 80 year-olds accounts for many of the store’s 35 volunteers who staff the store – open from 10 a.m. to 5 p.m. Tuesday through Saturday.

“The volunteers have become so supportive of each other. We are like a family. We are such strong friends,” O’Leary said.