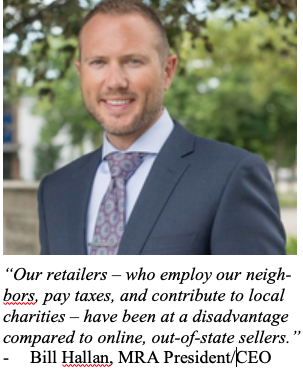 Public Acts 143-144 of 2019 correct a loophole that currently allows marketplace sellers who sell on online retail platforms like Amazon and eBay to avoid collecting and remitting sales taxes. It brings us closer to true sales tax parity for in-state retailers who have collected taxes and had to compete at a great disadvantage against online, out-of-state companies. This legislation reflects important changes in the retail economy and ensures that all sales are treated the same way in regards to tax collection.

“These new laws are not an online sales tax, but a fair application of the state’s tax laws,” said Bill Hallan, MRA’s President and CEO. “Our retailers – who employ our neighbors, pay taxes, and contribute to local charities – have been at a disadvantage compared to online, out-of-state sellers.”

For the state, HB 4540-4541 will aid in the most accurate and efficient collection of sales taxes on online sales made by out-of-state small sellers facilitated by marketplace platforms. The state is expected to see an increase in sales taxes collected from marketplace sales, estimated to be $60 million in the remainder of this fiscal year and $96 million in fiscal year 2021. This additional sales tax revenue goes to important state priorities, including the School Aid Fund and revenue sharing for communities.

Public Acts 145-146 codify Treasury’s already implemented guidance on the U.S. Supreme Court’s Wayfair decision. They ensure that out-of-state retailers who sell more than $100,000 into Michigan or make 200 or more separate Michigan sales must collect and remit our sales tax.

Michigan Retailers Association hopes these laws will mark the end of showrooming, where consumers visit Michigan stores but buy the product online for cheaper because no sales tax was charged. By capturing these facilitated sales, MRA joins 38 states in asking for fair tax treatment of retail sales.