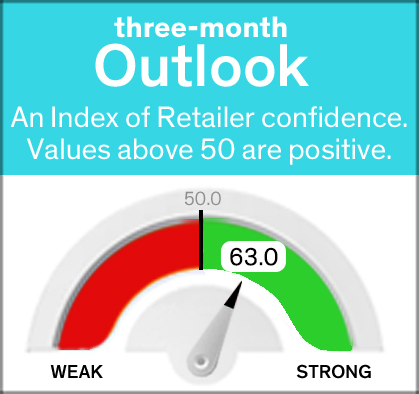 Retailers reported higher sales in November and the outlook looks strong for this winter, according to the Michigan Retail Index.

The November Retail Index survey came in at 52.2, a decrease from November 2018’s 63.5, and up from October 2019’s 43.0. The seasonally adjusted performance index is conducted by Michigan Retailers Association (MRA) in cooperation with the Federal Reserve Bank of Chicago’s Detroit branch.

The November survey showed that 36% of respondents reported sales increases over October. Thirty-nine percent of retailers recorded declines and 25% reported no change.

The Retail Index shows that 39% of Michigan retailers expect increased sales through February, while 35% predict a decrease; 26% expect no change. That results in an adjusted outlook index of 63.0 – a strong sign for a solid winter.

Shoppers have six fewer shopping days this holiday season compared to 2018. But Super Saturday – the Saturday before Christmas and the biggest shopping day of the year – is expected to be huge nationally, according to the National Retail Federation. NRF predicts 147.8 million U.S. consumers will hit stores, up from 134.3 million last year, according to its survey in conjunction with Prosper Insights & Analytics.