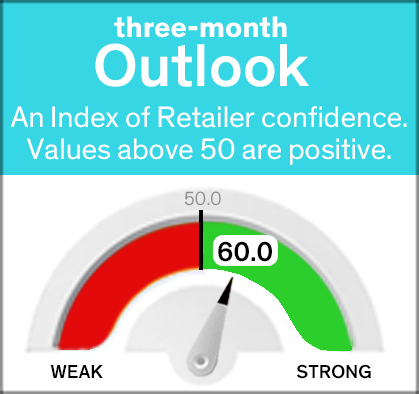 The September Retail Index survey came in at 63.7, an increase from August’s 48.1. The seasonally adjusted performance index is conducted by Michigan Retailers Association (MRA) in cooperation with the Federal Reserve Bank of Chicago’s Detroit branch.

The September survey showed that 51% recorded increases over August. Thirty-three percent of respondents reported sales declines and 16% reported no change.

With the holidays looming, retailers are optimistic for the next three months, but with caution. Many hope that consumers will shop early; if they wait until the last minute, they may run into shipping issues or product shortages of popular items.

Forty-nine percent predict their sales will continue to rise through December, but 31% said they expect a sales decline, and 20% don’t think things will change. That results in a 60.0 Index rating.

Retail is still proving to be a safe activity during the pandemic, and that’s boosted consumer confidence, said Bill Hallan, President and CEO of Michigan Retailers Association.

“We hope that continues. Many downtowns are gearing up to help businesses lure holiday customers by planning winter markets and other outdoor activities,” Hallan said. “More consumers understand the importance of buying nearby. It’s heartening to see that shoppers realize we’re all in this together.”