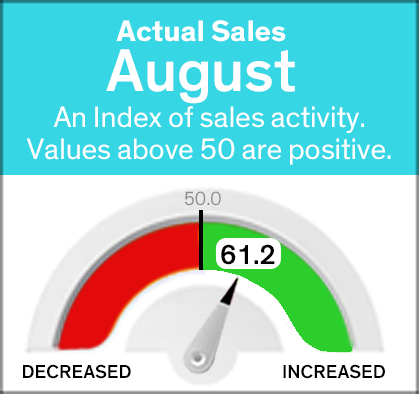 The August Retail Index survey came in at 61.2, up slightly from July’s 59.1. Sixty-four percent (64%) of Michigan retailers reported an increase in sales over July, 24% reported a sales decline; and 12% reported no change.

Fifty-five percent (55%) of retailers predict their sales will continue to rise through November, but 26% said they expect a sales decline. Nineteen percent (19%) anticipate no change. That results in a 60.7 Index rating, a small drop from last month’s prediction Index rating of 61.1.

“Retailers are experiencing a mild sales plateau. They’re still positive, but they aren’t increasing at the rate that we expected during the back-to-school sales period,” said William J. Hallan, President and CEO of Michigan Retailers Association.

“With back-to-school shopping behind us, retailers now focus on the holidays. We expect the 3-month prediction Index number to grow for the next few months as more consumers begin buying holiday gifts.”