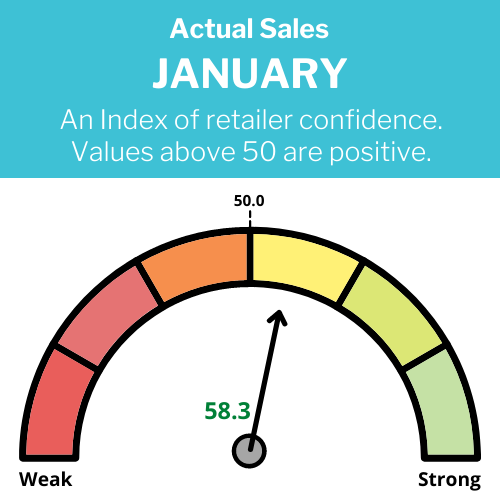 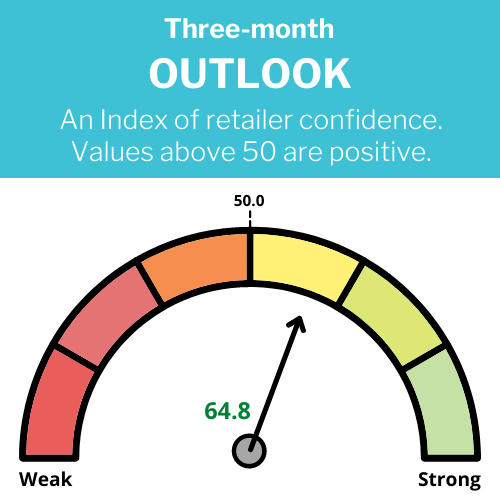 The January Retail Index survey came in at 58.3, a decrease from December’s 77.7. Thirty-one percent (31%) of Michigan retailers reported a sales increase over December; 46% noted a decrease, and 23% reported no change.

3-Month Outlook
Sixty-one percent (61%) of retailers predict their sales will continue to rise through April, but 13% said they expect their sales to decline. Twenty-six percent (26%) anticipate no change. That results in a 64.8 Index rating, a decrease over last month’s prediction Index rating of 72.3, but still an indication of positive activity.

“Following a record holiday season, it’s not abnormal to see a dip in sales,” said William J. Hallan, President and CEO of the Michigan Retailers Association. “Sales have a seasonal swing and typically the start of the year reflects it.”

Concerns Over Costs
Some survey respondents raise concerns over increasing product costs, supply issues, and rising wages. One retailer said they spend more time than ever tracking down deliveries and searching for alternative sources. Another said some of their product from suppliers won’t be expected until 2023 or 2024.

“With the current challenges retailers face, and adding cold temperatures and snowstorms into that mix, retailers are looking forward to spring. Their optimism remains high,” said Hallan.