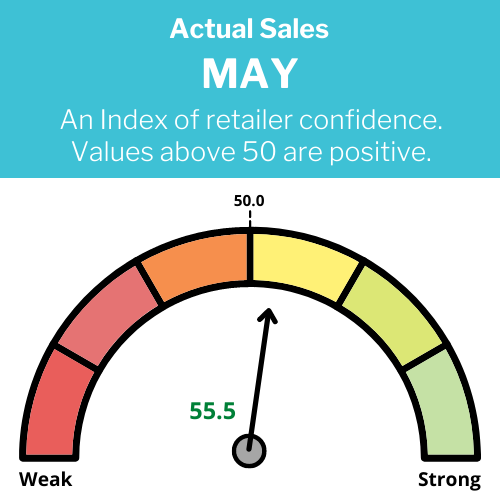 Michigan Retailers Association today reports that May 2022 sales increase over April. Until May, sales in Michigan have decreased, month-over-month, since February.

“With schools out and summer break starting, we tend to notice an increase in sales over the summer months as families begin their vacations,” said William J. Hallan, President and CEO of the Michigan Retailers Association.

“But with inflation and extremely high gas prices, summer traffic and tourism may be affected. Retailers may see more close-to-home, or day-trips from shoppers,” said Hallan.

3-Month Outlook
Fifty-seven percent (57%) of retailers predict their sales will continue to rise through August, but 20% said they expect their sales to decline. Twenty-three percent (23%) anticipate no change. That results in a 65.6 Index rating, a slight decrease over last month’s prediction Index rating of 70.2, however, still a good indication for high sales activity in the next three months.

Higher Prices on Everyone’s Mind
The Retail Index showed the trend of rising prices among retailers. Sixty-eight percent (68%) of retailers noted an increase in price adjustments over April. Only 5% reported a decrease. Twenty-seven (27%) reported no change in adjustments.

Looking ahead, 67% expect an increase in price adjustments, no retailers expect a decrease, and 33% expect no change.