Already two decades ago, Bill Hallan was helping merchants all across Michigan. He spent a summer in college going from store to store, installing or reprogramming standalone credit card terminals that would dial out over a telephone line.

The job often would take about a half hour, and Hallan would pass the time talking to shop owners about the values of the Michigan Retailers Association (MRA) and thanking them for being members.

“It really gave me the opportunity to see the businesses from the ground up,” he said. “It was great to see the members in their shops and provide a valuable service to them.”

Turns out that was good preparation because Hallan, now 37, is helping Michigan retailers with credit card processing and much more now that he has taken over as the MRA’s new president and CEO.

But his training for the role actually began even earlier, as a child. After all, the longtime MRA executive that he’s succeeding is James P. Hallan, his father.

James Hallan had been CEO of the MRA since 2008, and his recent retirement concluded his tenure that dates back to 1985 when Bill was just a toddler. As a result, Bill Hallan literally grew up around retailers. He met MRA board members and staff during his childhood and, as he got older, started picking his dad’s brain about things happening at work. 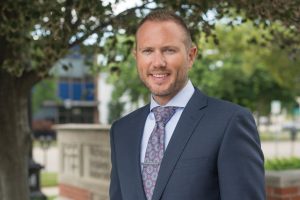 William J. Hallan took on the role of President and CEO of the association on August 27, 2019.

“I’ve basically grown up with Michigan Retailers in my life, for my entire life, so I hold it close to my heart,” Bill Hallan said. “My dad’s been a role model to me, and to watch him handle his role here as CEO with such integrity, and to grow the association to new heights through his vision, has been a great learning experience for me.

The MRA was organized in 1940, long before either Bill or James Hallan became leaders. It was created to be an advocate and trusted resource for the retail industry in Michigan, and that mission continues today as the MRA has grown into the largest state retail association in the entire country with more than 5,000 members representing over 15,000 stores and Web sites.

Of course, the ways the MRA supports Michigan retailers has changed through the years. For example, the MRA in 1969 became the first non-bank Independent Sales Organization (ISO) to offer credit card services. Today, the MRA processes about $1.4 billion in credit card transactions each year in all 50 states.

The MRA also provides members with insurance options including health, dental and workers’ compensation. Its staff runs educational seminars and workshops, and does legislative advocacy on issues such as Main Street Fairness.

Plus, the MRA promotes shopping local through its Buy Nearby campaign that includes an annual statewide celebration of Michigan retailing. Next year Buy Nearby Weekend is Oct. 2-4.

Basically, the MRA is a “one-stop shop” for Michigan retailers to find support that keeps the industry – and the communities in our state – strong.

“As a small retailer you’re out there by yourself, so being part of a larger group gives you a huge voice to speak from,” said Rick Melahn, a longtime MRA member who owned a store in downtown Saugatuck and now is retail manager at Impression 5 Science Center in Lansing, which features a large toy store.

“When you’re out there as a consumer you do have a lot of options today. But I think the bottom line is that the MRA helps to support that idea of keeping your dollars in the community, and that’s what Buy Nearby is all about. You’re helping support the shop owners to stay in that community and be a vital part of that community.”

The retail industry changed significantly on James Hallan’s watch, with the emergence of big-box stores and the rise of online retailing. Then there was the Great Recession through the end of the last decade that hit Michigan particularly hard. 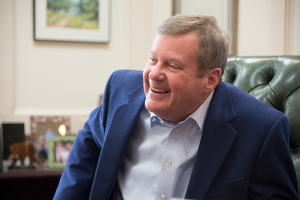 As James Hallan would often say, “the only constant is change.” In response, the MRA has been nimble through the years and proactively met the needs of members by helping retailers all over Michigan adapt to changing trends, new technology, digital marketing and more.

Now, as Bill Hallan takes charge, “his challenge will be the challenge that I faced: the changing retail and regulatory environment,” says his dad. Yet, the mission remains the same – to help Michigan’s retailers thrive, so that the communities in our state can prosper.