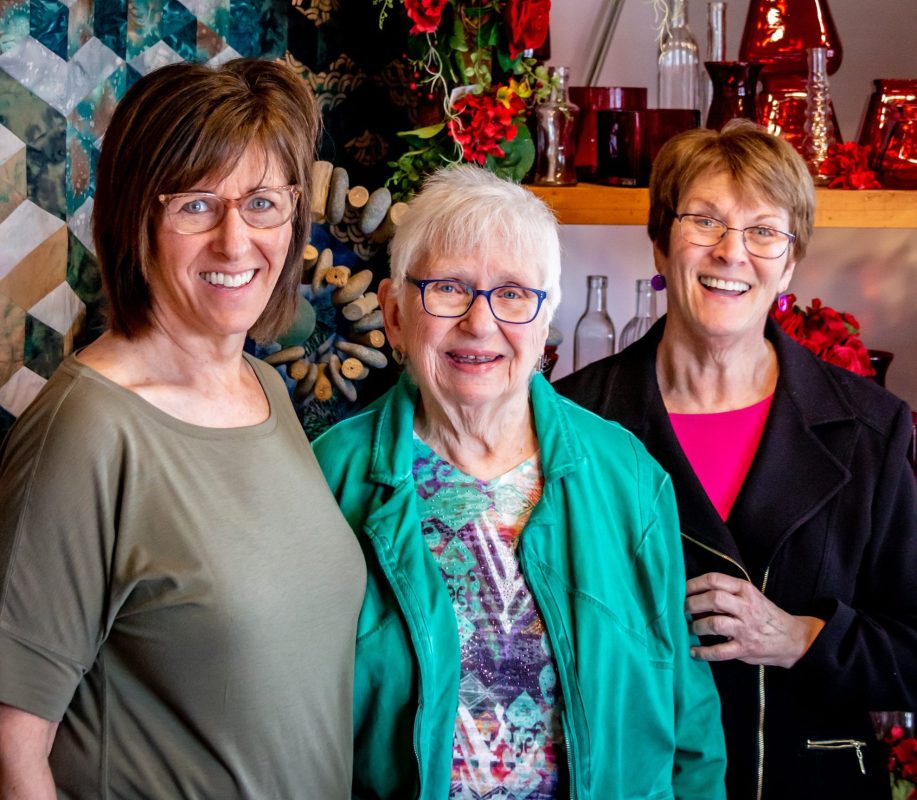 The flower shop Barbara Hollowick started in 1979 has put down deep roots in East Lansing. Her daughters, who run the shop now, say their mom’s “titanium backbone” helped them weather the challenges of the pandemic.

Barbara Ann “B/A” Hollowick was a divorced mom of three in her early 40s in 1979 when she decided to turn her love of plants into a business.

Not only did she largely develop her business without family support, but she did it at a time when women had little access to capital. It would be nearly a decade before the passage of the federal law — the Women’s Business Ownership Act of 1988 — that allowed women to get a business loan without a male co-signer.

“I was fortunate that I never had to borrow money, so I never owed anyone any money,” said Hollowick, who started the business, B/A Florist, with about $300 in savings, a few vases, and flowers.

In those early years, one wholesaler wouldn’t deliver flowers for big holiday orders, arguing it didn’t think the business had a chance of succeeding. The irony is that the male-owned, family-owned wholesale business closed more than two decades ago, while Hollowick’s East Lansing flower shop continues to flourish more than 40 years later.

“I always tell my mother that she has a titanium backbone. There are days where I might be whimpering about this or that, but I don’t have anywhere near the struggles she had,” Van Ark said.

I always tell my mother that she has a titanium backbone. There are days where I might be whimpering about this or that, but I don’t have anywhere near the struggles she had,” Laurie Van Ark

She and her older sister, Cheryl Fountain, still joke about Hollowick’s coffee mug that summed up her mantra: “If it’s going to be, it’s up to me.”

Although Hollowick earned her business degree from Michigan State University right before she opened the store, she says she benefited from being the daughter of a retailer. Her dad, Harry Raskin, sold auto parts.

Flower sales bloom
During the Great Recession in the late aughts, Van Ark asked her mom how she put up with the stress of the economic uncertainty.

“She said, ‘At the end of the day, I know I still have a roof over my head and food to eat, and this will pass.’ It makes me take one step back and really look at the bigger picture,” Van Ark said. “I’m sure she thought for many years that I wasn’t listening, but I did. I hear her voice all the time when I struggle with this issue or that issue, and the past two years were definitely a challenge.”

Hollowick began by selling plants and lean-to greenhouses. A few years later, she added a flower cooler. Soon, flower sales blossomed and the business shifted to serve that demand.

Van Ark was a high school junior when the store opened in Okemos. She helped out after school and on the weekends before heading to nearby Michigan State University to study merchandise management and textiles with a plan to find a job designing car interiors. When she graduated in 1984, her mother made her an offer: join her for five years to see if she liked the family business.

That year, the store relocated to an iconic house on the corner of Grand River Avenue and Hagadorn Road in East Lansing. 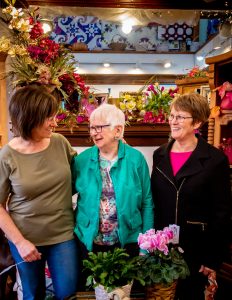 Sister act
Hollowick retired a decade ago after 33 years at the helm. At that point, Van Ark considered doing the same, but says B/A Florist not only gives her a livelihood, it also offers her a sense of purpose and community.

“It’s really wonderful the bonds that we have created with so many people in the community,” Van Ark said. “We’ve seen families from one end to the other: when they’re getting married, when they’re having babies, when their babies grow up. It’s neat to be included in people’s lives like that.”

Her sister returned to Lansing in 2013 after raising children and retiring from a career as an elementary school teacher in Arizona.

“I really do enjoy the customer interaction,” Fountain said.

Listening to customers about why they are sending the flowers is an essential part of the job, and no one on staff does it as well as Fountain, her sister says.

“I’m always saying she is making us friends again. It’s really beautiful, the thank-you notes and emails, and the things people post on our Facebook page or Yelp reviews, about how nice we are to work with,” Van Ark said. “My sister is never too busy to listen.”

Fountain’s decision to return to Michigan evolved out of the sisters’ habit of talking daily.

“She’d call me on her way home from work, and we’d just problem-solve and laugh. We’d always end the conversation by saying, ‘Oh, if only we could work together.’ Then I retired, and one day it was like a light went on. I thought I could make that happen,” said Fountain, who was divorced with grown kids.

She decided to put her house on the market and see what happened. When it sold instantly, she saw it as a sign and made plans to join the family business.

“I love being with my family. My mom is very happy. We’re all very close, so it worked out nice for everybody.”

Hollowick adds that she appreciates the family atmosphere her daughters have created for both longtime staff and customers.

Emphasis on the website
The sisters have appreciated having each other during the struggles of the past two years. The pandemic taught Van Ark to look at her business differently.

She now puts a bigger emphasis on the company’s website, even though most orders come by phone. More time was devoted to creating packages and adding better descriptions. The updates were designed to make the website as helpful as possible for those who couldn’t come into the store.

Van Ark credits her children — daughter Olivia and son David — for providing a lot of remote website help from college. Younger staff members also assist by taking photos and putting short videos on social media so people can get a peek at what’s available in the store.

Most of the walk-in traffic at the store, at 1424 E. Grand River Ave., on a busy corner near MSU, is from students.

“We have orders from all over the world, largely due to our proximity to MSU,” said Van Ark, adding there also are people locally who still prefer not to come into the store. “A lot of people would get on the website and they still call us because they want to talk about why they’re sending flowers. Those little changes to our website had a fairly significant impact on sales.”

The pandemic began with a forced closure after a major order of merchandise arrived at the warehouse. In recent months, the pendulum has swung. Supply chain shortages have driven up costs between 25% and 75%. For example, a funeral easel has doubled in price. With oil prices soaring, triggered in part by the Russia-Ukraine conflict, Van Ark recently heard from a wholesaler that surcharges are now in effect in addition to price increases.

When possible, she tries to work with local artisans. She has one who makes boxes out of planks from an old barn being taken down nearby. Part of the appeal for customers is that each box is unique and comes with a bit of Michigan history.

As she has navigated the business challenges of the pandemic, she has also watched how the past two years have changed customers’ taste for floral designs. As people have embraced the outdoors during a time of isolation and remote work, there are more requests for designs that imbue elements of nature. There’s also been a significant uptick in plant sales.

“My goal is to continually bring fresh, new ideas, and color to the business. I am constantly online, searching for trends, and I’m very color-motivated,” said Van Ark. “I like to keep things fresh, while keeping in mind that we have many customers that like traditional styles and colors, so we don’t do away with that. We like to have both.”

Wedding orders return
As a florist, she has experienced her customers’ emotional low points during the pandemic, which have brought an increase in arrangements for funerals and flowers for elderly relatives who have been isolated in retirement or care facilities. Being close to that pain has been heartbreaking, Van Ark said.

“There’s a saying in our industry, ‘Say it with flowers.’ It’s so true, because people use flowers to express their sentiments, whether they’re happy or sad or trying to pick someone up or celebrate something,” she said.

She knows her customers appreciate that extra level of service that comes with their commitment to supporting locally-owned independent retailers like hers.

Wedding orders are returning. Brides are shifting away from traditional bouquets that are tightly constructed to a more loose and natural look.

Van Ark couldn’t be happier to see this part of her business return after so many weddings were postponed or scaled back dramatically during the pandemic because of restrictions on large gatherings.

“Now that people are getting married again, it’s like the sun finally came out,” she said. “It’s so nice to see people living their life again.”