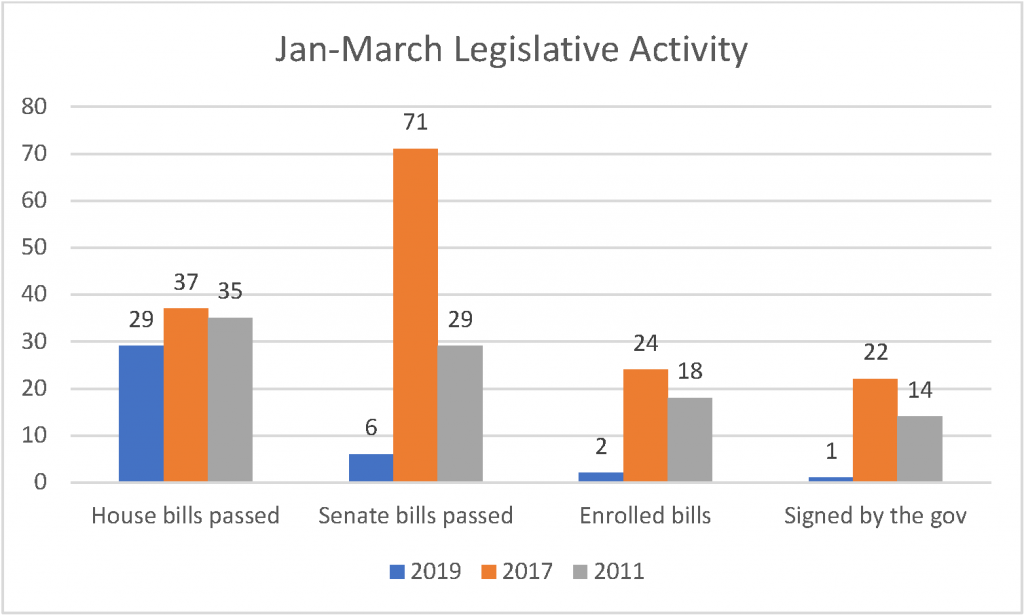 Legislators are currently on a two-week spring break. They will return on Tuesday, April 9 and are scheduled to meet through the end of June. With the budget about a month behind schedule thanks to the new administration, the legislature may need to stay in session through July and maybe even August. Once the House and Senate start approving their versions of the budget towards the end of April we’ll have a better idea of how much negotiation will need to occur between the legislative and the executive branches.

While you wouldn’t know it looking at the calendar full of meetings we’ve had with legislators, it’s been a fairly quiet spring in terms of legislation. For MRA, the beginning of each new session is full of “meet and greet” meetings with new legislators and getting to know new committee chairs/leadership. Those meetings filled our scheduled through the end of February and then we shifted our focus to working on proactive legislation and addressing bills introduced by legislators.

To put the slower than usual spring in perspective, this year the House has only passed 29 bills and the senate has passed six bills. Only two bills have been enrolled and sent to the governor’s desk and only one has been signed into law. Compare this with last session where by this time, the House had passed 37 bills and the Senate 71 bills. 24 bills had been enrolled by the same time and 22 signed into law. In former Gov. Snyder’s first term (2011) the House had passed 35 bills and the Senate had passed 29 bills.18 bills had been enrolled and 14 had been signed into law. This could be due in part to the changes in the committee process in the house where they’ve added a secondary review committee system. It is more likely due to divided government. The Republican controlled legislature and Democratic administration are still determining which items they can work together on jointly.

The 20-cent question: which law changes take effect on March 29?

Thanks to updates to Michigan’s minimum wage and new paid leave benefits that take effect on March 29, employers must update their labor law posters. In addition to the changes in employee benefits, the state has updated its minimum wage poster and added a new paid medical leave poster. These posters are required by law to be posted somewhere visible to all employees (typically located in the break room, back room or near employee bathrooms).

MRA members receive free labor law posters as a member benefit and updated posters are in progress. However, we are waiting to see if the courts will weigh in on the laws that may result in any changes. Meanwhile, MRA members can print off the PDF posters provided by the state to stay in compliance.

AG will not weigh in on min wage, paid leave…yet

Michigan Attorney General Dana Nessel said yesterday she would follow the tradition of the office and not issue an opinion on an issue that is currently before the courts. The legislature asked the Michigan Supreme Court to review the legality of the process used to adopt and amend the laws last year. Nessel was asked last month by a state senator to opine on the legality of the minimum wage and paid leave changes that take effect on Friday. Her decision to not weigh in while the issue is before the Michigan Supreme Court follows precedent set by previous AGs. Nessel’s statement does signal that she will likely issue an opinion if the Michigan Supreme Court does not take up the review.