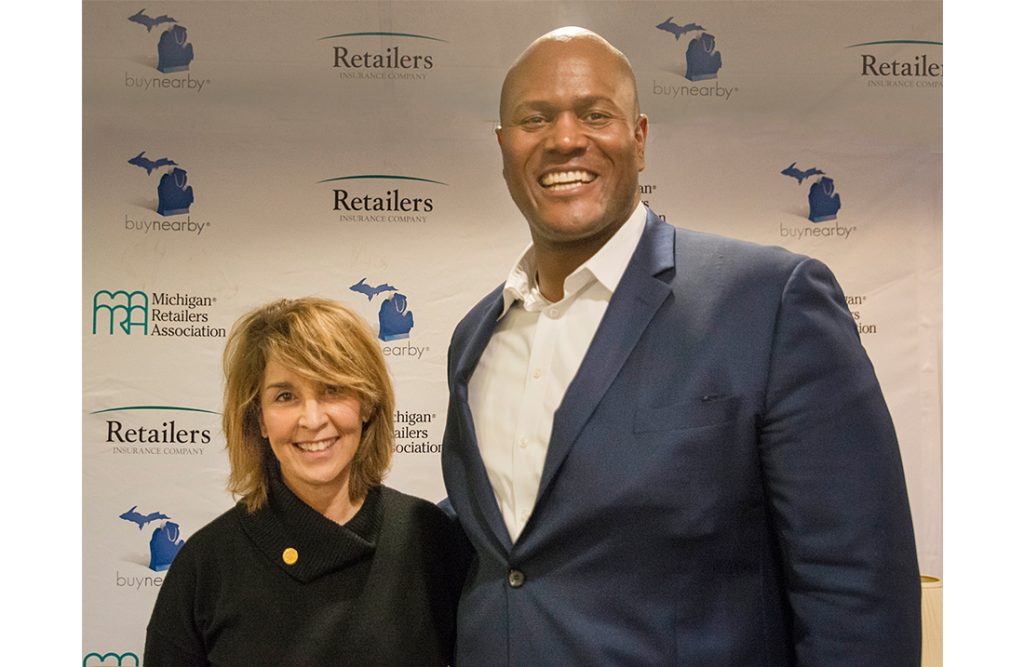 The bipartisan legislation sponsored by Rep. Lynn Afendoulis (R-Grand Rapids) and Rep. Joe Tate (D-Detroit) ensures retailers have true sales tax parity for most sales. It was signed into law by Gov. Gretchen Whitmer on Dec. 12 as Public Acts 143-144 of 2019.

“These bills bring retailing into the 21st century economy,” said Amy Drumm, MRA Vice President for Government Affairs. “Finally, our retailers have a level playing field as they compete against out-of-state online retailers.”

The bills were part of a bipartisan, four-bill package that also put the Wayfair thresholds the state had already adopted into statute, preventing any potential for a legal challenge.

The two lawmakers received their awards Tuesday from Bill Hallan, President and CEO of the Michigan Retailers Association.

“We wanted this legislation because Michiganders send $18.5 billion to out-of-state sellers every year, partly because of the unfair advantage they’ve had over local brick-and-mortar stores,” Hallan said. “We work hard to educate shoppers to keep their money in the Mitten. It benefits our economy and gives a huge boost to our communities.” 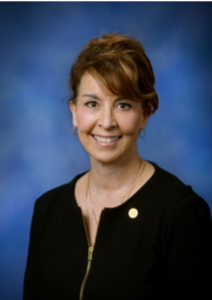 State Rep. Lynn Afendoulis is serving her first term in the Michigan House of Representatives. She represents the 73rd district, which covers a portion of Kent County including the city of East Grand Rapids. As a freshman legislator, she was given the distinction of serving as chair of the House Tax Policy Committee. She also serves on the committees for Health Policy; Military, Veterans, & Homeland Security; and Transportation & Infrastructure.

Sponsor of HB 4540, which amended the state’s Sales Tax Act, Chairwoman Afendoulis was a tireless advocate for the legislation. She was involved at every stage of the process, hammering out differences between the Department of Treasury and interested parties while keeping a keen focus on helping Michigan retailers get relief from an unfair tax system that favored their out-of-state, online competitors. HB 4540 was her first bill signed into law.

Prior to serving in the legislature, she worked for Universal Forest Products, Inc. in various capacities, including director of corporate communication. She serves on the boards of the Grand Rapids Area Chamber of Commerce, the Economic Club of Grand Rapids and Legacy Trust and on the parish council of her church, Holy Trinity Greek Orthodox Church. She attended Miami University (Ohio) and graduated from Michigan State University with a degree in journalism. She has one son and one daughter. Last summer she announced she is running for Congress in Michigan’s 3rd congressional district to challenge incumbent Justin Amash (an independent who’s previously run as a Republican). 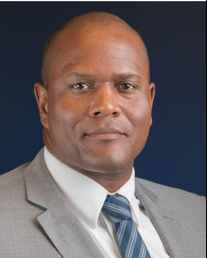 State Rep. Joe Tate is serving his first term in the Michigan House of Representatives. He represents the 2nd district, which covers a portion of Wayne County including part of Detroit’s Lower East Side, Grosse Pointe Park, Grosse Pointe City, and Grosse Pointe Farms. He serves on the House Appropriations Committee and as minority vice chair of the Military, Veterans Affairs and State Police appropriations subcommittee in addition to the General Government and School Aid and Education subcommittees.

Sponsor of HB 4541, which amended the state’s Use Tax Act, Rep. Tate was one of the first legislators to express a strong interest in our marketplace bills. From our first meeting he understood the value of ensuring tax fairness for retailers and offered to help any way possible. He was instrumental in connecting with the administration and ensuring his colleagues and the Department of Treasury were supportive of the bills. He remained in frequent contact with MRA throughout the legislative process and was engaged and knowledgeable about even the smallest details. HB 4541 was his second bill signed into law.

Before joining the Legislature, Tate helped small businesses grow their capacity as a program manager for the Detroit Economic Growth Corporation. As a teenager, Tate earned a scholarship to play football at Michigan State University before joining the National Football League. After the NFL, he went on to serve in the United States Marine Corps, deploying twice to Afghanistan during Operation Enduring Freedom. After an honorable discharge from the Marine Corps, he earned both an M.B.A. and a Master of Science in Environmental Policy and Planning from the University of Michigan.

Michigan Retailers Association represents more than 5,000 member businesses and their 15,000 stores and websites. MRA has been a trusted business resource for 80 years and provides cost-saving membership services, such as expert credit card processing, business and personal insurances, legislative advocacy, college scholarships and discounts on shipping, to all types of businesses.