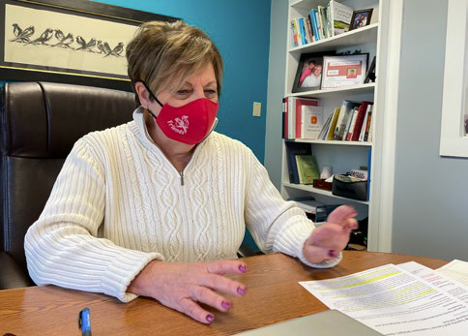 For 26 years, Friends Together has been there for people who are battling cancer, whether that means providing transportation to medical appointments or finding a place where they can talk about their experiences.

The nonprofit began with a promise a mother made to her dying daughter.

When college student Dawn Burns was diagnosed at 23 with an aggressive form of colon cancer, her mother, Judy Burns, did everything she could to find a treatment for her oldest daughter. Just getting the diagnosis of the rare form of cancer took six months. Dawn died at 25, leaving her parents heartbroken but determined to help others.

“I traveled all over the United States with her to different cancer institutes, and we never ever got good news. Before she passed away, I promised her that no one would go through what we did, which was really being all alone,” said Burns.

As the Alpena nonprofit has grown to serve people across six counties in rural Northeastern Michigan, Burns has had to be smart about resources. Joining the Michigan Retailers Association has provided access to an affordable insurance package and a member community that puts a premium on service. 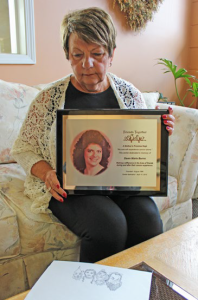 Judy Burns, founder of Friends Together, poses with a photo of her daughter, Dawn, whose death from cancer inspired Burns to form the cancer support group in Alpena.

‘PART OF SOMETHING BIGGER’
“I feel like we’re part of something bigger because we’re an organization that really is solo. There’s no one else like us. I really appreciate the relationship and network that comes from MRA membership,” Burns said.

“We have a full small business package, which included everything from cyber problems to liability and slip-and-fall. We packaged it all together. It just felt really good. We had a better understanding of the liability risks that we take with our volunteer drivers and staff as we are transporting patients,” Burns said. “I have a background in insurance, but the problem is, things change over the years. I needed to be sure that what we were doing was best to protect everybody.”

Burns couldn’t have anticipated the journey that her life took when she made good on her promise to her daughter. It began by hosting a meeting for people who were interested in supporting families coping with cancer. More than 40 people attended.

Initially, the plan was to start a monthly support group. She had experienced the benefit of them while her daughter was seeking treatment at cancer treatment centers and the Mayo Clinic.

MEETING THE NEEDS
Friends Together has grown to meet the needs it’s encountered. The nonprofit serves thousands of people, hosting 11 support groups, and it has two vans that transport patients anywhere in the state they need to go for treatment. If they need to stay overnight, the nonprofit finds a way to help with lodging.

“We give out about $30,000 in gas cards every year because we’re so rural that the distance can be an obstacle to treatment,” Burns said.

The group pays for items that aren’t covered by insurance, like special bras for breast cancer survivors or wigs. A popular item is a healing comfort shirt — a lightweight top that velcros up the front and can be worn after surgery. There was nothing on the market, so Burns found a company to make them and has given out thousands to breast cancer patients over the years.

“We try to fulfill the mission that no one should go through cancer alone, and we help with whatever the needs may be. We do not accept any money for our services. That’s really important to me. We don’t ask about income or insurance coverage, or any kind of financial statement,” she said.

The organization stretches every dollar of its $375,000 annual budget, which is funded with donations and private grants. There are four people on staff, including Burns, along with paid facilitators who lead the support groups that meet every day but Friday.

There are plans to expand to Tawas, located about an hour’s drive south.

One of the group’s big success stories is its outreach to men. Its annual Hops and Health has drawn upward of 80 participants. The men gather at tables and are visited by health professionals, who rotate and talk to the men about health issues. She calls it speed dating with wellness in mind. 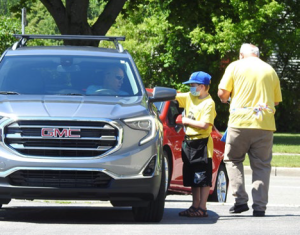 A motorist drops off a donation at a drive-thru fundraiser for Friends Together, an Alpena nonprofit group that supports cancer patients and their families, in June 2020.

BEING AN ADVOCATE
“I’ve had some come up to me and say, ‘This actually saved my life,’” Burns said, sharing how one participant had been told there was no treatment for his cancer. At the event, he was referred to a University of Michigan doctor and is still going strong a decade later. The event has been successful in convincing attendees to follow up with their doctors on health issues they might have been ignoring.

“Just being an advocate for somebody is life-saving for them,” said Burns, whose strategy has been to identify a need and find a way to take care of it. “We try to figure out a way or to refer them to an agency or a center that can also help, whatever the issue is.”

Roger Mendel is one of those who credits Burns’ support for helping get through his treatments for esophageal cancer.

“She’s provided something that is totally not seen in other places in the country,” said Mendel, an Alpena resident and lifelong friend of Burns. “It’s a frightening thing when the doctor sits across from you and tells you that you have cancer. Your brain goes dark, but Judy has been the one who helps you get through it. She has helped so many people.”

Burns continues to feel the personal anguish of this disease. Her husband, Gordon, died in June, shortly after being diagnosed with Stage 4 pancreatic cancer.

Turning that suffering into something that helps others has been key. She thinks Dawn would appreciate what Friends Together has accomplished and continues to do.

“She would be so happy,” Burns said. “Her wish was that somehow we could help others along the way, and so Mother keeps her promise.”