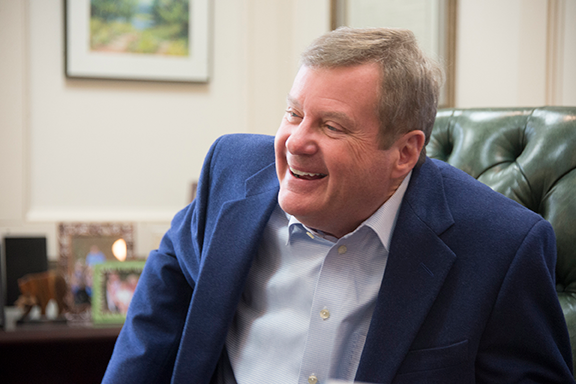 “What an honor to represent the retail industry,” Hallan said. “Not many people get to be a spokesperson for thousands of members. It’s your voice that hopefully carries the right message.”

Hallan has witnessed a massive transformation in retail since he joined MRA in 1985. Back then, the hot retailers were Main Street brick-and-mortar stores like Jacobson’s, Montgomery Ward, Steketee’s and Perry Drug. Then malls and national brand stores came along. Big box stores like Walmart started dominating the scene, and now that has morphed into online retailers.

He grew up in Holland, the youngest of three children of parents who emphasized work. His father was president of a soft drink bottler and his mom stayed at home to look after him and his two older sisters.

Work was a given, and his high school job was at the local IGA store. He was in charge of the cake mix aisle, where he learned what sold best when, and how to stock shelves to move product. He knew early on he wanted to be a lawyer, so after getting his bachelor’s in political science and economics at Ohio Wesleyan University, he earned a law degree from the Detroit College of Law.

MRA has had its highs and lows – “especially when the world fell apart on 2008-09; those were challenging times,” and he says that retail hasn’t fully bounced back from the Great Recession. But the association in 2018 came off one of its strongest years, with a record-breaking $1.4 billion in credit card processing with accounts in 50 states and record profits for Retailers Insurance Co. 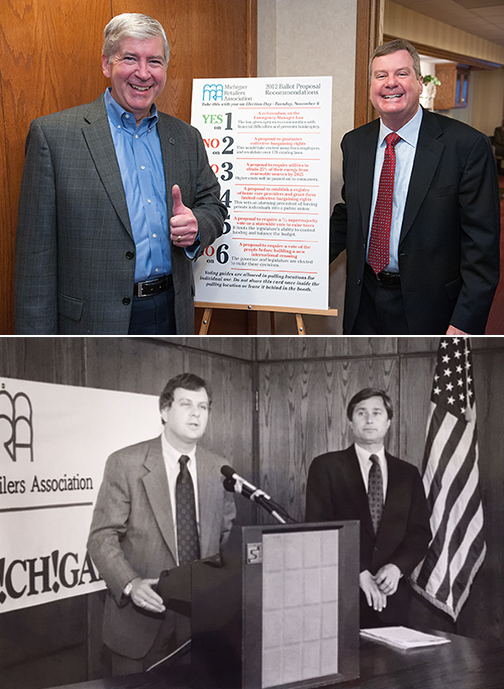 Hallan’s relationship with governors has made MRA a strong advocate (top, with Gov. Rick Snyder, and below, with Gov. James Blanchard.)

“What distinguishes Michigan Retailers from other like-minded trade associations is the entrepreneurial spirit that we have here,” Hallan said. He credits MRA for knowing early on that it couldn’t be just a dues-based organization. It needed to offer valuable services for members, and that’s how credit card processing and the insurance offerings came about.

Hallan was very much a part of that entrepreneurialism. He “did a great job creating a very dynamic and wonderful organization that we at the Grand Hotel are proud to be a part of,” said Executive Vice President Ken Hayward, a board member.

Previous President and CEO Larry Meyer, who hired Hallan, credits him with taking MRA to new heights. “Michigan Retailers has progressed to the point where it’s the largest state retail organization in the country, and Jim made it happen,” Meyer said.

When Hallan joined MRA in 1985, there were several larger trade associations and MRA ranked as a mid-tier association. He helped develop partnerships with other associations in which they’d promote MRA’s credit card processing products to their members. Such referral arrangements have been a boon to the organization.

“There’s a right way and wrong way to do business. If you’re ethical and you do the right thing, in the long run you’re going to have a lot more business,” Hallan said. “We’re in the customer service business and we’re a voluntary organization. Nobody is required to write that dues check every year so we have to prove ourselves.”

He cites some important qualities that have led to Michigan Retailers’ success.

• Finding your niche: The association role today fills a different niche for members. “In early days, associations filled a need as a social gathering place. But as more families had two working parents, time became stressed and that social need was no longer there. So you had to figure out what that need was. Is it a service need, is it a business need, is it a legislative need, is it an educational need?”

• Being in a position to act: Hallan never stopped looking for opportunities and made sure that MRA had the financial capacity to take advantage. In the past few years, MRA has brought on the Michigan Retail Hardware and Michigan Grocer associations.

The hardest part of his job was moving big issues through the legislature. It meant educating lawmakers on why MRA’s agenda is good policy. Hallan’s relationships with every governor since Milliken means MRA has had a strong voice. It succeeded in educating lawmakers as to why item-pricing had become outdated, why online sellers collecting sales tax was necessary to bring Main Street Fairness to brick and mortar stores and how principal shopping districts would benefit downtowns.

The fun part is the non-profit Buy Nearby program, which has a charming mascot named Buy Nearby Guy who travels around the state. The campaign encourages Michiganders to “Keep your money in the Mitten!” – another Hallan turn of phrase.

In retirement, he’ll continue with the Retailers Insurance Co. board and he is chair of the Delta Dental Foundation. He looks forward to golfing, spending more time with seven, soon to be eight, grandkids along with his wife, Beth of 44 years, who has always been a “wonderful partner and sounding board who kept the home front running smoothly. Family is very important to me, and we are blessed with three wonderful children.” Two girls, Mary and Claire, and son Bill, who will succeed him as MRA’s President and CEO. Bill is currently MRA’s Executive Vice President, Chief Operating Officer and General Counsel. “I’m very proud of all of them and their families.”

“Bill will be terrific in his new position,” Hallan said. “MRA operates in a highly regulated atmosphere. His legal background and his personal skills will serve him well. His challenge will be the challenge that I faced: the changing retail and regulatory environment.”

Hallan takes pride in leaving MRA in a stable financial condition, with no debt.

“I grew up in a business family; I was fortunate enough to have a law degree and I always loved politics. For me this was a perfect career,” Hallan said. “I had the opportunity to run a business, use my legal skills and engage in the legislative process. It’s been a great run.”